Introduction
Module 1: Laying The Foundation To Success: How To Create A Beautiful Profile & Curate Content With Ease
Module 2: Everything You Need To Know About Hashtags & Growing On Auto-Pilot
Module 3: Hacks & Strategies To Skyrocket Your Following
Module 4: Monetizing your Instagram account
Instagram Stories, Live, and IGTV
Bonuses

Getting featured, tagging, and ‘s4s’ - 3 strategies to increase your exposure

Talking about Top Posts, there are a few other strategies I want to talk about at this point, that can also help you grow your account and those are getting featured by other accounts, tagging or ‘@mentioning’ and ‘s4s’ also known as ‘shoutout for shoutout’.

Getting into the Top Posts, also means that you’re going to get noticed by feature accounts. Feature accounts are accounts that basically repost other users’ images and give them a shoutout in their repost.

Just so you get an idea, one of my students, Helena from @Helenarawandlifestyle gained over 600 new followers in one day when she got featured by @bestofvegan!

The bigger the account, the better for you, of course, but even smaller accounts can help you to increase your exposure, so as long as people are giving you credit for the photo and are sharing your posts correctly (by mentioning you in their caption and tagging you in the photo), there's no downside for you. It’s a fantastic way of promoting your account and getting your posts in front of a larger audience, without actually having to do much yourself!

@ Tagging - the strategy no one is talking about

Next, let’s talk about tagging or ‘@mentinoing’. Tagging is a strategy that not a lot of people are using or talking about, but it’s super effective if you’re trying to get noticed by a certain account, especially by a certain feature account.

The way feature accounts usually choose their posts is by going through their own hashtag. By using a feature account’s hashtag you’re basically giving them permission to repost your image without having to ask you first.

The problem is that feature accounts can receive hundreds of new posts with their hashtag a day, so it can be difficult for your picture to stand out and to get noticed amongst all the other posts.

If you’re tagging that feature account, however, they will receive a notification and are much more likely to see your post!

So, how do you best implement this strategy?

Speaking of getting featured, there is another similar strategy you can use to grow your account, which is called ‘Shoutout for Shoutout’ or ‘s4s’ (you might have seen that as a comment or hashtag on someone’s post, or maybe someone even left such a comment on one of your posts).

A shoutout is basically when a user shares another users’ post and mentions them in their caption to drive traffic to the other users’ account, in hopes of them receiving more engagement and new followers. So the idea behind ‘s4s’ is that you partner up with another account and give each other shoutouts, in order to cross promote each other and to encourage your followers to check out your shoutout partner’s feed and to follow them.

This strategy can work really well, as long as you’re happy to feature other users’ content. If this is something you want to implement, then you should start by searching for potentials partners who share a similar target market, and who have a similar following, as they’ll be more likely to agree to your proposal. You can also start by reaching out any of your followers who regularly engage with your posts, as they already know about you and seem to like your posts, so they might be more likely to agree to a collaboration than someone who’s never heard or seen from you before.

Networking is hugely important if you want to be successful in getting ‘shoutouts for shoutouts’. Always make sure you engage with the other account, and show genuine interest in their posts before asking them about an s4s. When contacting other users for a potential collaboration, I always prefer to write to them directly through a direct message rather than just spamming them with “s4s comments” on their posts. As always, make sure you’re polite, and don’t expect them to say yes. Having said that though, most Instagramers are always looking to grow their accounts and increase their exposure, so as long as they like your feed and can see the value in collaborating with you, they’ll probably say yes!

As with anything, s4s takes time and work, and how often you do s4s will determine how much success you’ll have with it, and how fast you’ll grow your following. It’s of course a different story if you do one shoutout for shoutout a month, or if you do various each week. How often you’ll implement this strategy will depend on how many s4s partners you’ll find, and how much of other users’ content you’re happy to share in your feed.

If you want to work with big accounts, you’ll have to work your way up to the top! As your account grows, you’ll be able to collaborate with bigger accounts and see better results. Doing s4s on Instagram can be a great way of connecting with other users who share your passion, and you might be able to so a lot more collaboration in the future, and help each other grow your accounts. I’m a huge fan of working with other people in my industry, and I’ve found that there are a lot of like-minded people out there who feel the same, which is what makes networking and reaching out to other users on Instagram so pleasant!

"s4s" examples - have a look at the captions, some are more subtle, some a little more "aggressive". 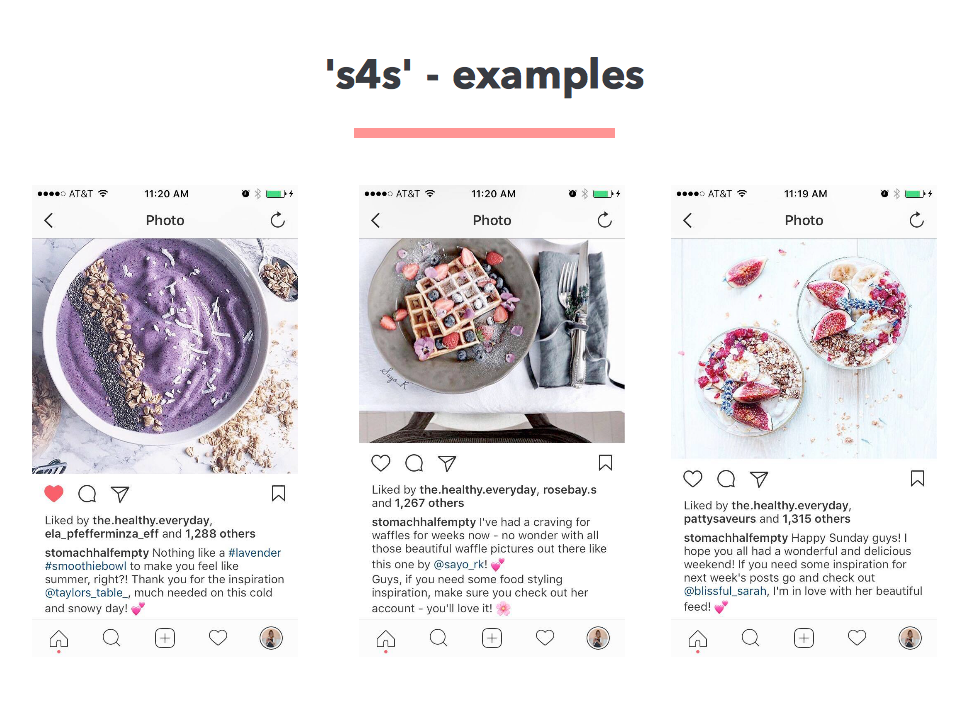